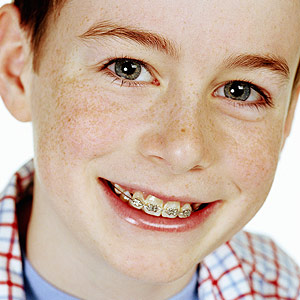 You’ve been concerned for some time about your child’s bite, so you’ve visited an orthodontist for an evaluation. Even though your child is quite young and still with primary teeth, the orthodontist recommends they begin wearing a retainer device, with the possibility of braces in a few years.

That may at first sound like an overly extensive treatment plan. For certain bite problems, however, undergoing an early stage of orthodontic treatment could reduce or even eliminate the need for more advanced and costly treatment later.

An example of such a problem is a crossbite, also known as an underbite. With this type of malocclusion (bad bite) the lower front teeth bite in front of the upper front teeth rather than behind them as in a normal bite relationship. Because the teeth and jaws are still in development (including the primary teeth, which are preparing the path for the permanent teeth erupting later), wearing a retainer device could exert just enough pressure to influence the teeth toward a better alignment.

In essence, the goal of early orthodontic treatment is to intercept a bite problem ahead of time and prevent it from becoming a more serious one later. If early treatment isn’t undertaken or delayed until after the eruption of the permanent teeth, it will be much more difficult, if not impossible, to correct the malocclusion. Even if the initial treatment doesn’t correct the problem it could at least lessen its severity so that future treatment like braces or clear aligners can correct it with less difficulty and cost.

By getting an early start on bite problems, you’ll increase the chances your child will achieve an optimum bite when they reach adulthood. Not only will this enhance their appearance, it will greatly benefit their overall health and mouth function. In these cases, early orthodontic treatment could make all the difference in the world.

If you would like more information on orthodontic treatment for children, please contact us by calling 844-62-GRAND to schedule a consultation. You can also learn more about this topic by reading the Dear Doctor magazine article “Preventative & Cost Saving Orthodontics.”